The Influencer Marketing Landscape in Indonesia

With the Government fighting for Indonesia to become the top 10 countries in the world, especially in the digital economy by 2030, brands and consumers alike are going digital. The gradual shift to digital media has resulted in the rise of social media users - 184 million active users and brought about an influx of influencers. Read on to find out why influencer marketing is all the rage now and how to hop on board.

First things first, influencers are individuals with the power to influence others. Think about all the times you have purchased a product just because it was endorsed by a famous figure, and they said it was good (well, you wouldn’t even have to say a word if you’re K-POP Boy Band BTS). The easiest way to understand Influencers is to categorize them into 4 tiers - Mega, Macro, Micro and Nano - according to their follower count.

Mega influencers are basically celebrities (e.g Raffi Ahmad) with the highest number of followers, resulting in the greatest reach. As such, you’d have to prepare a larger budget to seal the deal. While they have the greatest reach, Mega influencers are the ones with the lowest engagement of the bulk. Celebrities receive countless number of comments daily - it’s impossible to reply to each and every one of them and a lot of times, they don’t even manage their own accounts.

Macro influencers (e.g. Cherylraissa) are similar to Mega influencers, apart from their difference in follower count. Macros are individuals with 100K and above followers and their engagement rate averages between 1% to 3%. They don’t come cheap but are slightly more affordable than Mega influencers. Most of the existing bloggers and content creators like Sarah Ayu fall under this category.

Micro influencers (e.g. Valentina Melati) have a smaller follower count ranging from 10K to 100K, but typically, they rank higher than Macros and Megas in terms of engagement rate (3% to 5%). They are also more cost-friendly in comparison to Macro influencers and believe it or not, Government bodies have engaged micro influencers for their campaigns!

Nano influencers (e.g. Cindy Kholisafani) include anyone with less than 10K followers online. Unlike influencers from other tiers, Nanos generally have the highest level of engagement (7% to 10%) with friends and family constituting the bulk of their followers. If you’re working with a smaller budget or if you’re particular about authenticity, Nano influencers are your best bet! To put things into perspective, the budget meant for 1 macro influencer can be used across 50 nano influencers or more! 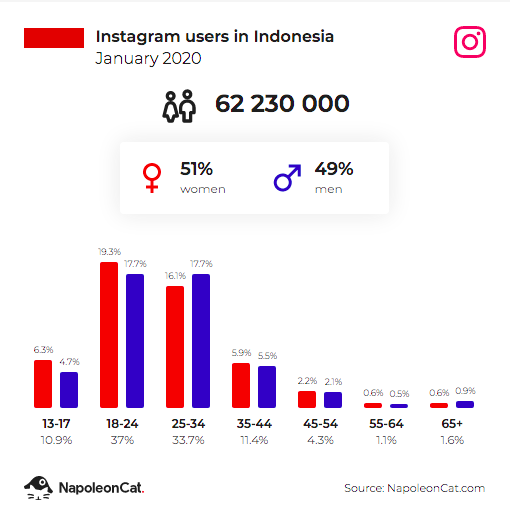 According to NapoleonCat, the number of Instagram users is dominated by users aged 18-24 years. If your target audience uses Instagram a lot, promoting your business on Instagram is a must. Moreover, according to the survey, as many as 45 percent Indonesian users often buy the products they see on Instagram and tend to make purchases based on recommendations from social media influencers. Because of this, we encourage brands targeting younger generations to engage influencers. For best results, the platform of choice should be Instagram. As mentioned by Jian Hao Tan, "Instagram is really brand friendly and reaches those under 30 years old".

Due to brand image and guidelines, a brand’s advertisement is very much restricted. Their ads may also be seen as repetitive as their creativity reaches a standstill over time. This is where influencers come in. Unlike brands, the sky's the limit for influencers. Influencers are compelled to take your ideas to the next level because the content would be going up on their carefully curated feed, and interesting shots receive more likes and eyeballs! You’d stand to gain as well with more people learning of your brand.

Influencers develop their own style over time. For instance, Diana Rikasari is your go-to aesthetically pleasing and creative content. On the other side, Vennya Adisuryo would be more suitable for fun and funny content. Her content may not look aesthetic, but she's definitely more acceptable. To get the best of both worlds, brands can engage more than one influencer to promote the same product.

To spread the word about Lazada 11.11's biggest discounts, brands are collaborating with influencers on multiple levels. 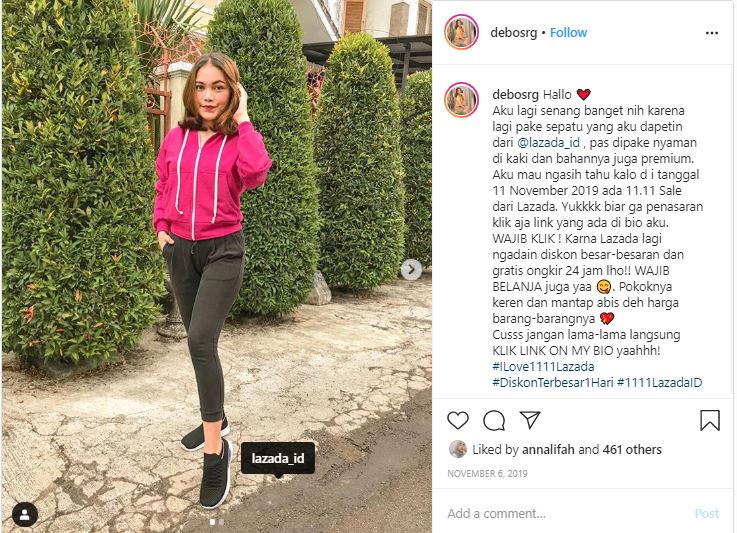 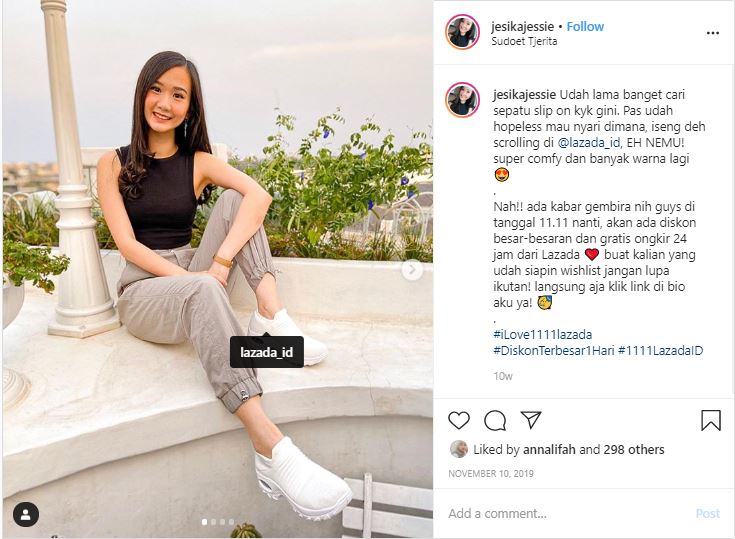 Both influencers shared about the same sale but their content and caption is curated in their own style. They did so while adhering to Lazada 11.11 requirements - to mention the campaign and include relevant hashtags as well as the campaign.

Say you’re a skincare brand and your product reduces wrinkles significantly. You’d definitely emphasize your product’s benefits and include reviews in your ads. However, from a consumer’s perspective, it could be seen as pushy and unconvincing, since there are brands out there who make false claims.

On the other hand, when influencers share about the same product, their followers tend to be more receptive because (1) influencers have gained the trust of their followers over time, (2) their branded content is less likely to be as aggressive, (3) they’re more inclined to share both pros and cons of the product, and lastly, (4) they are knowledgeable on specific topics of interest i.e. beauty, and are therefore seen as credible sources of information. 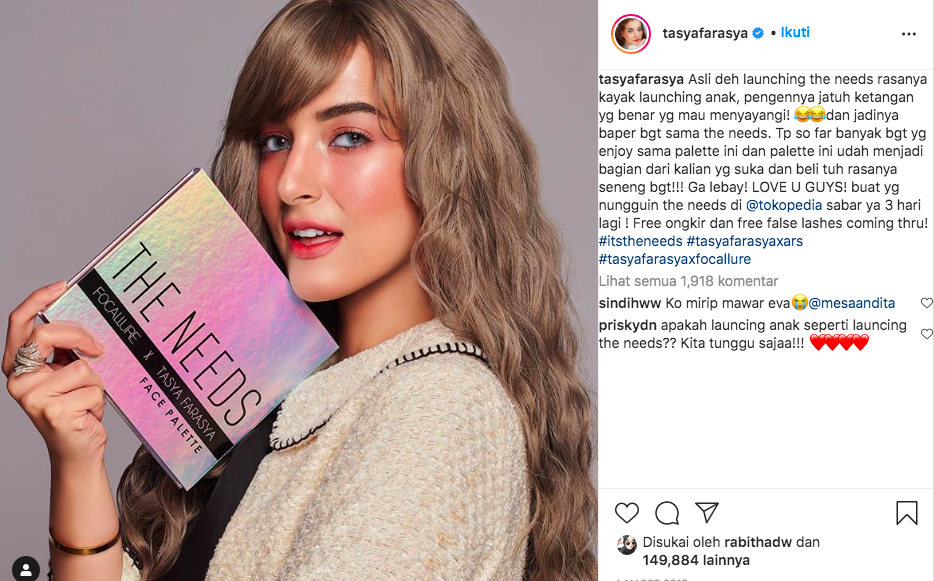 Tasya Farasya, is a makeup junkie and a huge fan of Focallure makeup products. She has been raving about their product for a while now and is providing reviews for her followers to support her claim. Tasya also uploaded a video of herself testing the product to get better authenticity. Because of his love for these products, Tasya even collaborates with the Focallure brand.

The arrival of social media eventually led to the shift in channels used for advertising. With online ads, brands can better target specific groups of audiences (who frequent social media platforms) unlike traditional media where eyeballs for your billboard advertisements are lost if your target audience takes a different route.

With advertisers going digital, we now have to sit through at least 5 seconds of advertisement before getting to the YouTube video proper. To mute these “annoying” adverts, social media users are turning to AdBlockers. According to the Blockthrough report, 64% of the population  AdBlock used  Blockthrough in 2020!

For greater relevance, brands have started using influencers capable of getting the same message across effectively (without their audience tuning out). Apart from garnering more views, influencers have access to numerous groups of followers - this means greater awareness for your brand! 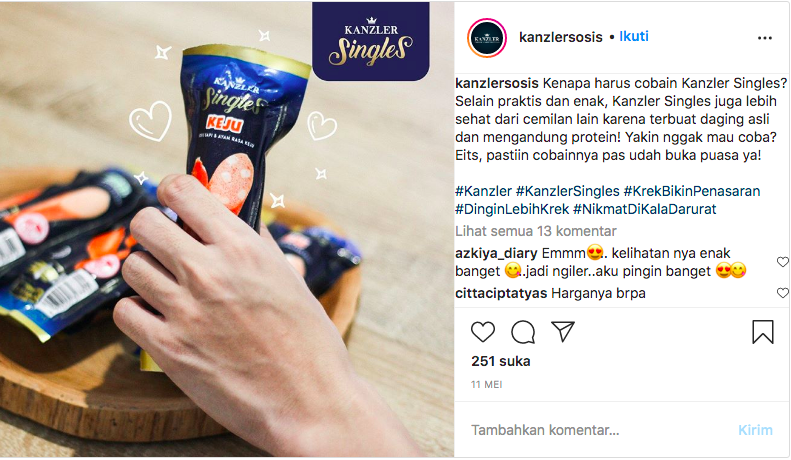 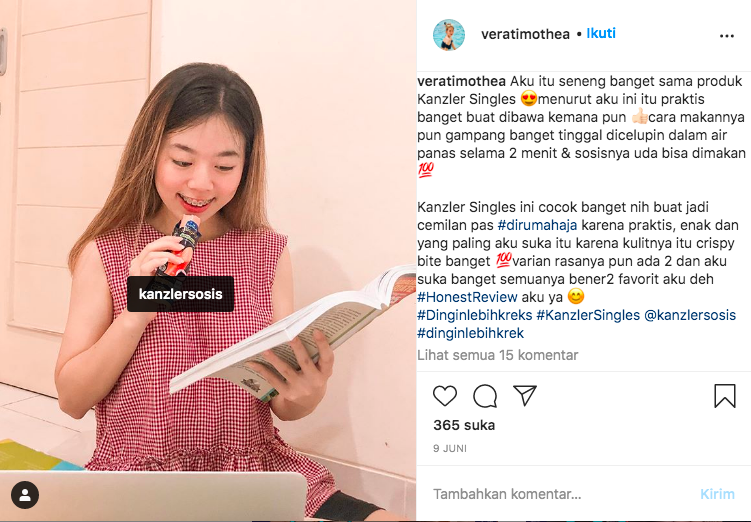 Kanzler and influencer Vera Timothea agree on the same sausage product. However, their photo angles and photo captions are very different. Kanzler appears with an angle of luxury and aesthetics, while Vera's photos are more relaxed activity, practical and in tune with her image as a young person. Judging from the photos above, Vera's photo is more well-liked by Indonesians.

Getting started on influencer marketing

Ready to try your hand at influencer marketing? Be clear of the following first:

All these are interlinked. For instance, to target students, Instagram and YouTube are more effective options than Facebook since the latter is commonly used by adults to keep up with their family and friends. Younger influencers are more relevant to students, but keep your budget in mind because different influencers have varying rate cards. If raising brand awareness is your main objective, consider engaging more than one influencer. For instance, to capture the attention of students, your brand message should be concise and fun.

Teenagers are at the age where their battle with acne is especially tough. Hence, Himalaya Herbals reached out to students through Titan Digital Media who uploads school-based skits on YouTube. As influencers themselves, each cast member has a pretty large following online which include youngsters, making them good spokespeople for Himalaya’s anti-acne products.

With more consumers prioritizing authenticity, there’s no better time to give influencers a shot.